How much weight does the Court give to the views of children in family proceedings? 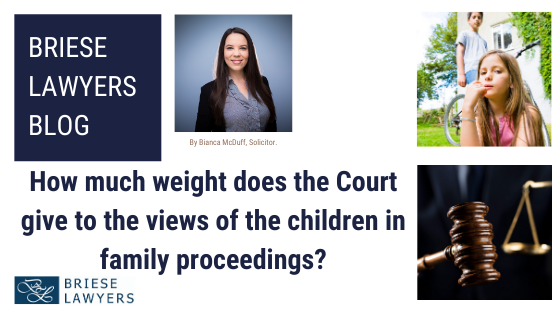 Separation can be a difficult time for not only the parties involved but also their children.  Although we often see that parents' wish to shield their children from the unpleasantness of a family break down, understandably they also want to ensure that the children's wishes are taken into account for parenting arrangements.

This gives rise to the question, do your children have a say in who they want to live with?

The Courts primary concern when determining parenting arrangements is to make orders which are in the best interest of the children. In determining this, the Court must take into account the benefit to the children of having a meaningful relationship with both of the children's parents and the need to protect the child from physical or psychological harm or family violence.

The wishes of the children are only one of the additional considerations when the Court is determining parenting arrangements. There is no set age for when a child's views will be considered however, the weight the Court will give to the children's wishes will depend on the child's age, maturity, level of understanding and ability to express their view.

Whilst it is not appropriate for children to be called to give evidence in family law proceedings, there are a number of way in which children may have a voice in the proceedings:-

In the High Court of Australia case of Boldermonte v Boldemonte [2017] HCA 8, the Court reiterates that the children's wishes are relevant, but not determinative. The matter concerned parties who had separated in 2010. They had two sons aged nearly 17 and 15 years old and a daughter aged nearly 12 years old.

The High Court held the views or wishes of the children, "are but one consideration of a number to be taken into account in the overall assessment of a child's best interest" and that the Court will "take into account not only the views expressed by the child, but also any factors….that the Court thinks are relevant to the weight it should give to the child's views. The factors that the provision gives as relevant are the child's maturity or level of understanding, but plainly the Court may consider other matters to be relevant".  In addition, the Court considered important the lifestyle the father was offering them in New York exerted an influence over the children’s choices, and that the views expressed by them had been ‘contrived’ by the father.

The Court found that despite the sons’ refusal to live with their Mother that they must return to Australia and in the event the Father returned to Australia, they could continue to live him. Otherwise provisions would need to be made for the sons’ to live with the mother if they chose to do so, live in accommodation provided by the Father together with paid supervision services or live with friends' families.

In short, although your children have a right to have their voice heard in relation to parenting arrangements, the weight given to the views of the children will be determined by the individual facts of each case.

This information is provided as a general guide only and should not be used or relied upon by any person without obtaining legal advice in relation to their own circumstances.

site by: On Time Marketing