Sperm Donor Recognised as a "Parent" 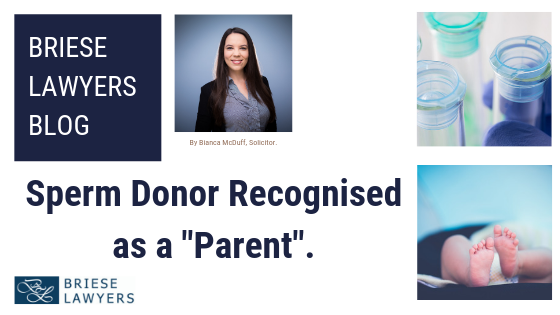 In the High Court decision of Masson v Parson [2019] HCA 21 made 19 June 2019, Mr. Masson successfully appealed against a decision that as a sperm donor, he was not a "parent" of a child.

In 2006 Mr. Masson provided his semen to the biological mother of the child in the belief that he would, as the child's parent, be named on the child's birth certificate as her father and would support and care for her.

Although the child lived with her biological and non-biological mother's from birth, Mr. Masson had an ongoing role in the child's life and provided financial support & input into her health, education and general welfare.

In 2015, after marrying in New Zealand, the child's biological and non-biological mother's attempted to relocate to New Zealand with the Child. Mr. Masson, wanting the child to remain in Australia, applied to the Family Court of Australia for a restraint on the child relocating to New Zealand, shared parental responsibility and regular time with the child.

In making its decision, the Court found:

"to characterise the biological father of a child a "sperm donor" suggests that the man in question has relevantly done no more than provide his semen to facilitate an artificial conception procedure on the basis of an express or implied understanding that he is thereafter to have nothing to do with any child born as a result of the procedure. Those are not the facts of this case."

This decision will no doubt have broad applications for private arrangements of sperm donors and parties utilising artificial insemination procedures in the future.

This information is provided as a general guide only and should not be used or relied upon by any person without obtaining legal advice in relation to their own circumstances.

site by: On Time Marketing